Chrysler workers are waiting for answer about their destinies

Thousands of Chrysler workers want to know whether they would be spending their next work day on picket lines or assembly lines. 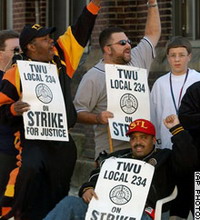 Chrysler workers are waiting for answer about their destinies

They also wondered whether a walkout by 49,000 members of the United Auto Workers would be long or short. And they are a little leery of Chrysler's new owners, the private equity firm Cerberus Capital Management LP, which may not behave like auto companies of the past.

At factories and union halls across the Detroit metro area Tuesday, workers filled out paperwork for strike pay and signed up for picket duty as the 11 a.m. (1500 GMT) Wednesday strike deadline approached.

Negotiators continued to talk at Chrysler's Auburn Hills headquarters, working most of Monday night and into Tuesday with only a short break.

Bryan Currie, a master electrician at the company's Sterling Heights assembly plant, said workers discuss Cerberus on the factory floor because its track record during contract negotiations is unknown. Still, he said, union members have to stick together.

"We still have to look at what the issues are and go from there," Currie said. "They're asking for huge concessions. It's not something that you can just lay down."

Setting a strike deadline does not necessarily mean that workers will leave their jobs. The UAW could extend its old contract hour-by-hour as it did with General Motors Corp. before going on a two-day strike last month.

The UAW ended its strike and announced a tentative agreement with GM on Sept. 26. The company's 74,000 UAW members were voting on the pact, with totals to be released on Wednesday.

The union normally settles with one U.S. automaker and then uses that deal as a pattern for an agreement with the other two Detroit-based automakers. But several industry analysts have said that Chrysler and Ford Motor Co. have different needs and therefore need different contracts.

Many industry analysts believe Cerberus will fix the money-losing Chrysler quickly, return it to profitability and sell it for a huge profit, perhaps to a foreign auto company that wants a stronger U.S. presence.

In August, Daimler transferred an 80.1 percent stake in Chrysler to the New York-based Cerberus in a $7.4 billion(5.27 billion EUR) deal. The German automaker retained a 19.9 percent interest in Chrysler.

The bargaining appeared to center on the UAW granting the same health care cost concessions to Chrysler as it did to GM and Ford in 2005, as well as how much Chrysler would pay into a company-funded, union-run trust that would take on its roughly $18 billion (12.82 billion EUR) worth of retiree health care costs. The union agreed to the creation of such a trust in the case of GM last month.

Also at issue are the union's desire for job security pledges at U.S. factories and Chrysler's wish to contract out parts transportation now done by higher-wage union members, according to a person briefed on the talks. The person requested anonymity because the talks are private.

It would be to Cerberus' advantage to settle some of Chrysler's labor cost issues in the new contract without a lengthy strike, said Standard & Poor's credit analyst Gregg Lemos-Stein.

"One would have to imagine if their return on investment would be superior if they were to achieve a contract that would address some of these very serious legacy cost issues," he said.

Chrysler has said it plans to temporarily idle five assembly plants and some parts making factories for short stretches during the next two weeks in an effort to adjust its inventory to a slowing U.S. automotive market.

Chrysler also will try to reduce its salary and contract work force by roughly 1,500 more people, largely through early retirement and buyout offers.

UAW spokesman Roger Kerson and Chrysler spokeswoman Michele Tinson would not comment on the talks Tuesday.

Chrysler had a 71-day supply of cars and trucks on dealer lots at the end of August, according to according to Ward's AutoInfoBank.

There is an even larger supply of some truck models, with 79 days on Dodge trucks, said Paul Taylor, chief economist with the National Automobile Dealers Association.

The relatively large inventory means that a short strike would not hurt the company much, Taylor said, although it could cost sales of the Chrysler Aspen sport utility vehicle and the Jeep Wrangler four-door, both of which have been selling well.

A walkout that lasts longer than a month would start to cut into sales, Taylor said.

"Several days would allow them to thin their trucks down a little bit," he said. "Certainly a month would start to leave them without the selection they need to sell strongly."

David Cole, chairman of the Center for Automotive Research in Ann Arbor, said it appears the GM contract will be ratified with about 60 percent of the vote.