Hillary Rodham Clinton wants to rejudge trade agreements to see if they are helping or not, reflecting an effort by the Democratic presidential hopeful to address one of her biggest problems with labor groups - her husband's signing of the North American Free Trade Agreement. 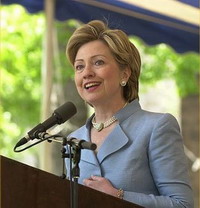 "I think it is time that we assess trade agreements every five years to make sure they're meeting their goals or to make adjustments if they are not," Clinton told an audience of Iowa voters that also included the presidents of four unions supporting her presidential bid. "And we should start by doing that with NAFTA."

Her Democratic rival John Edwards has been criticizing her husband's role in NAFTA, particularly before union audiences that he is trying to win over and who feel it has cost U.S. jobs. Edwards wants to re-negotiate the agreement that lowered economic barriers between the United States, Canada and Mexico.

But while Edwards and other Democrats have been increasing their criticism of Clinton, the leader in the race, she focused on President George W. Bush during a two-day tour of Iowa aboard a bus emblazoned in red, white and blue with her name and "Middle Class Express."

Clinton stressed that her economic leadership should be judged by how well the middle class fares in the U.S.

Her speech was full of nostalgia for the values she said she learned growing up in 1950s middle class America - and with negative statistics about the economy under Bush. She said there has been increasing globalization, a housing crisis, growing income disparity and fiscal irresponsibility, and Bush has failed to respond.

"Anybody who tells you the Republicans are the party of fiscal responsibility, just roll your eyes," Clinton said to laughter from an audience gathered at City Hall in Iowa's second largest city.

She said her father taught her about debt and the importance of a balanced budget, and she promised to take those values with her to the White House.

Republican National Committee spokesman Danny Diaz said although Clinton is talking about prosperity for the middle class, she would increase spending dramatically and raise taxes.

"Clinton's tax-and-spend express makes it clear once more that she truly believes the government knows best how to spend our money, run our health care, and raise our children," he said. "Luckily, the American people know better."