Kazakhstan not to review contract with Eni-led consortium

Kazakhstan will not review a major oil development contract with an international consortium led by Italy 's Eni SpA, the country’s President said amid a row sparked by production delays. 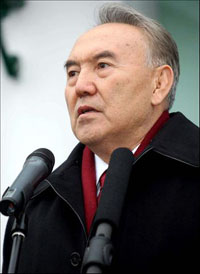 Kazakhstan not to review contract with Eni-led consortium

"We are not talking about revising the contract that we signed (with the consortium) 10 years ago," President Nursultan Nazarbayev, said. He, however, warned that the government will take measures in line with the national law against any foreign investor who "breaks the existing contracts."

"I'm sure that Eni understands the task it faces," Nazarbayev said after talks with visiting Italian Prime Minister Romano Prodi.

Prodi, on his first trip to the oil-rich Central Asian nation, said that "Eni is ready to accept (the Kazakh government's) terms and continue cooperation."

The ex-Soviet republic's government wants to renegotiate with the consortium the terms of the development of the massive Kashagan oil field in the northern Caspian Sea over delays in commercial production and cost overruns.

Kazakhstan's government in August suspended operations at Kashagan and warned that the state-run energy company Kazmunaigaz could increase its role in the project. Kazmunaigaz now has a stake of just over 8 percent in the project.

The Kashagan project is now scheduled to start commercial production in 2010, delayed from an original 2005 date. Kazakh officials also say Kashagan's total costs have jumped to US$136 billion (EUR96 billion) from an initial estimate of US$57 billion (EUR40 billion).

The development of the Kashagan field is at the core of Kazakhstan's strategic plan to triple its oil output by 2015 and become one of the world's top oil producers.

Eni estimates Kashagan, one of biggest oil discoveries of the past 30 years, will produce 1.5 million barrels of oil a day at its peak output.

Last month, Kazakhstan's parliament passed a bill allowing the government to review contracts with foreign companies on the development of subsurface resources if they are deemed damaging to the country's strategic economic interests. The bill will become law after it is signed by Nazarbayev.

The past few years, Kazakhstan - a vast country lying south of Russia and west of China - has been trying to increase state assets in its energy sector, which is currently dominated by Western investors.

The next year the Parliament passed a law allowing the government to revoke oil licenses from oil companies in case of change of ownership. That threat eventually forced China's National Petroleum Corp. to sell to Kazmunaigaz a 33.3 percent stake in the Canada-listed PetroKazakhstan.