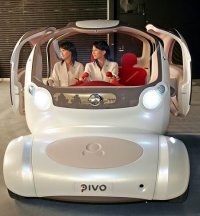 The weels of new Nissan’s Pivo ball-shaped car turn 90 degrees and the cabin part can rotate in a complete circle.

The Pivo 2, being shown at the Tokyo auto show later this month, is a three-seat ecological commuter car that's fully working but too expensive to go on commercial sale just yet, according to Nissan Motor Co. officials.

In a demonstration Friday, the concept car rolled up next to a tiny parking space, turned its wheels at an angle, then scooted into the space without the back-and-forth jockeying that most cars would need.

The top part of the car, whose name is inspired by the word "pivot," swivels 360 degrees, independent of the wheels, so drivers can turn to face whichever direction they want.

Nissan designers added robotics functions to the Pivo 2, an upgrade of a car shown a couple of years ago, so that a bobbing mechanical head near the steering wheel speaks in a cute electronic voice to provide companionship.

Nissan also claims the robot can detect the driver's mood by analyzing changes in facial expressions picked up by its digital-camera eyes and using a microphone that picks up the driver's voice to detect volume and speaking speed.

The robotic head says preprogrammed phrases to deal with various emotions, such as, "Relax, don't worry," if the driver seems upset.

"We want people to feel how cars can be so much fun," said Shiro Nakamura, Nissan's head designer.

Nissan also plans to unveil its flagship sportscar Nissan GTR at the Tokyo Motor Show, set to open to the public Oct. 27.

Pivo 2 can be recharged by plugging a cable into a regular home socket and travels 125 kilometers (78 miles) on a single charge, according to Nissan.

Masato Inoue, chief designer for Pivo 2, says he wanted the car to be more than just an inanimate object, perhaps something with which people can grow emotionally attached.

Japanese culture has always been more open than other nations to seeing robots and other machines as friends, Inoue said, and Pivo 2 is likely to appeal to Japanese of all ages.

"Design used to be about the shape," he said. "These days, it's also about how a car relates to its surroundings - how it communicates with and is recognized in society."