Chip-equipment spending to be flat in 2008

Makers of semiconductor manufacturing equipment can extend well into next year. 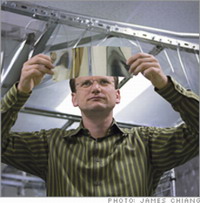 Chip-equipment spending to be flat in 2008

The market for equipment that makes computer memory has faced an inventory glut this year, sparking a steep decline in average selling prices for the memory chip widely used in personal computers. South Korean Hynix Semiconductor Inc., the world's No. 2 producer by sales in that market, said this week that it stopped supplying the chips to the open market in a bid to shore up plummeting prices.

Signs are emerging that chip makers are planning to spend less in 2008.

Micron Technology Inc., the world's No. 5 maker of computer memory equipment by total sales, said Tuesday that its 2008 capital expenditure budget would be $2.5 billion (1.76 billion EUR), down from $4 billion (2.82 billion EUR) in fiscal year 2007.