The first U.S. financial services company will be co-owned by a Chinese firm, thus displaying an example of cooperation in a global economy. 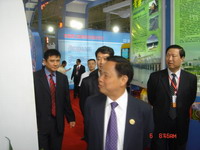 At a news briefing, investors announced the creation of HuaMei Capital Company Co. Inc., with the primary aim of assisting cross-border mergers and acquisitions.

"It's a global economy, and we're not going to change that here in Chicago," said Mayor Richard M. Daley at the news conference.

"It's an amazing miracle," Melamed said.

Melamed played down the perception that China and the U.S. are competitors. "The Chinese people are our friends and they want to do business," he said.

Former U.S. Sen. Adlai E. Stevenson III, co-chairman of HuaMei, said the firm will act as an intermediary and adviser to bridge cultures and complete deals.

Stevenson and Melamed lead a group of investors holding a 30 percent stake in HuaMei, which means "China America" in Mandarin Chinese. Its main offices will be located in Chicago and Beijing.

"There are rapidly increasing demands for investment, merger and acquisition among enterprises in China and the U.S. with the constant growth of China's economy and constant enhancement of China's competitiveness," said Shaolin Gong, HuaMei co-chairman and chairman of China Merchants Securities.

HuaMei will also offer advice on private equity investments and help set up risk management and proprietary trading for its clients, including participation in derivatives.

Melamed acknowledged that CME Group stands to gain a share of China's derivatives business because of the exchange's diverse product line. Melamed said the Chinese partners are interested in proprietary trading and "very cognizant" of his connection to CME.

CME Group was formed in July after the merger of the Chicago Mercantile Exchange and the Chicago Board of Trade.

Melamed has made frequent visits to China as part of CME's efforts to expand ties to the world's most populated nation.