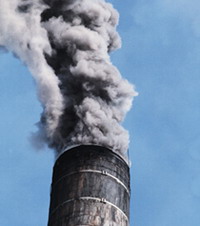 The green tax - imposed Monday - will be used to help Quebec reach its Kyoto Protocol targets to reduce greenhouse gas emissions by 2012.

The tax is expected to raise about $200 million (141.2 million EUR) yearly to finance the province's green plan.

Companies will have to pay the tax according to their emission coefficient, and oil companies will be on the hook for most of it.

However, industries not directly involved in the energy industry, such as cement and mining companies, also face the levy.

When Canada's Liberal government published the carbon tax legislation in June 2006, wording in the original legislation said companies that import 25 million liters of petroleum or carbon products a year for use are considered energy distributors. That means those companies would be saddled with the distributor tag and the prospect of paying the carbon tax.

The outcry this summer from those industries forced the government to reconsider the wording of the legislation and ponder whether exemptions are necessary.

Pascal D'Astous, a spokesman for Canada's Natural Resources Minister Claude Bechard, said the government is working on revising the rules, and the Quebec Energy Board sent revised legislation to the government, which is currently under study.

"We are waiting for the regulation framework we sent in August to be adopted by the government," said Quebec energy board spokesman Pierre Methe.

It's also not clear if the carbon tax will be passed to consumers.

Carol Montreuil, vice president of the Canadian Petroleum Products Institute in Eastern Canada, said there is no guarantee companies will swallow the tax or tack it onto the price of fuel at the pump.

"Until it's in place and we can actually track the market for so many days or weeks after it's in place, no one knows what is going to happen with this new fee."

About 50 companies are expected to be affected by the tax.

Canada, which ratified the Kyoto accord, is failing to meet its Kyoto target of reducing greenhouse-gas emissions by 6 percent below 1990 levels by 2012. Last month, Canada's Prime Minister Stephen Harper said that the target is impossible to achieve and is endorsing a call for setting targets for reducing the country's total greenhouse gas emissions 20 percent by 2020 and 60 to 70 percent by 2050.

Retired US intelligence officer: Russia will win in Ukraine in summer of 2023