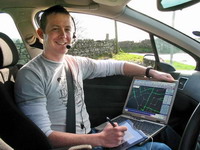 The deal announced Monday, one of Nokia's biggest ever, brings the Finnish company's ample financial resources to a location-based services industry fast accelerating toward mainstream use as consumers embrace the growing variety of applications for global positioning systems.

Analysts said it also headed off a potential similar move by a company such as Google Inc. or Garmin Ltd. to snatch away Chicago-based Navteq, one of the few remaining providers of mapping data with the pending acquisition of rival Tele Atlas NV by TomTom NV.

"This kind of cements Nokia's push into navigation," said Mark McKechnie, an American Technology Research analyst. "As the leader in the cell-phone business, they want to see more and more functionality get into the handset - taking the turn-by-turn directions, for example, and moving them from high-priced car applications to applications that fit in your pocket."

The deal comes just over a month after Nokia unveiled new services and cell phones that customers can use to download music and play games in a clear challenge to Apple Inc., highlighting a push to add photo, music and video capabilities and easy Internet access to its handsets. Its new Web services are to be on a site known as "Ovi" - Finnish for "door" - that will include an online music store.

"Nokia's acquisition ... makes it highly likely the company will be able to leverage its new Ovi Internet initiative into a successful offering for operators," Cowen and Co. analyst Matthew Hoffman said in a research note.

The price tag was high, partly reflecting that shares in fast-growing Navteq have doubled since May. Under the agreement approved by the boards of both companies, Nokia will pay $78 (54.81 EUR) in cash for each Navteq share, including outstanding options.

A trailblazer of the digital map business, Navteq produces the maps and software found in automobile navigation systems, portable navigation devices made by Garmin and other companies and Internet map sites like AOL's Mapquest, Google Maps and Yahoo Inc.'s Yahoo Maps. Founded in 1985 and only profitable since 2002, it has over 3,000 employees in 30 countries.

Nokia said Navteq would continue to support its existing customers as before - with the Navteq map data business continuing to operate independently - but that it would be organized as a Nokia group company.

Nokia President and Chief Executive Olli-Pekka Kallasvuo said "location-based services are one of the cornerstones of Nokia's Internet services strategy. The acquisition of Navteq is another step toward Nokia becoming a leading player in this space."

By acquiring Navteq, he said, Nokia "will be able to bring context and geographical information to a number of our Internet services with accelerated time to market."

Concerns that Nokia might potentially keep some or all Navteq information to itself prompted a double-digit tumble in shares of Garmin Ltd., one of Navteq's biggest customers.

But Nokia's comments seemed to dismiss that prospect, and some analysts called it unlikely. McKechnie said antitrust regulators could attach restrictions to the deal to prevent that.

The acquisition is subject to regulatory approvals and is expected to close in the first quarter in 2008. It will be financed through a combination of cash and debt.

Nokia said it expects the acquisition to dilute its earnings in 2008 and 2009, but that it will not impact share buybacks under the current mandate, or future dividends and share buybacks.

Neil Strother, a wireless analyst in Seattle for Jupiter Research, called the acquisition a bold move for Nokia, in part because of the risk of alienating carriers by coming up with its own plans for content.

"If I'm a carrier and here's Nokia selling the same thing, it puts it in question," he said. "But Nokia has the cash and the market presence worldwide to be able to do this kind of thing."

Navteq products, meanwhile, should benefit as the move into cell phones widens exposure to them and heightens already-booming interest in GPS.

"The hype and promise have been there for several years for location-based services," said Strother. "Now we're starting to see some money being made and more interest by consumers because the devices are better and the technology and the networks are being leveraged for it."