Latter crisis to promise slower activity of US economy

A worsening housing slump and a credit crunch mean a period of slower activity of U.S. economy. 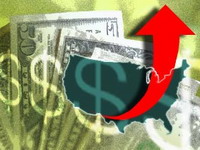 Latter crisis to promise slower activity of US economy

If lucky, the economy will not be knocked over. But the country could be in for a bruising that will put the economy on weaker footing.

The latest sign of the deteriorating housing market came Thursday. New-home sales tumbled in August to the lowest level in seven years. The credit crunch has made it harder for some would-be buyers to obtain financing. Prospective buyers trying to get "jumbo" mortgage loans - exceeding $417,000 (294,076 EUR) - have been especially stung; financing for that segment of the market had really dried up in the late summer.

"A lot of people are on the sidelines," said David Seiders, chief economist for the National Association of Home Builders.

Manufacturers and other businesses are feeling the ill effects of the housing and credit problems. Demand for costly manufactured goods, such as cars, appliances and machinery, plunged in August by the largest amount in seven months, the government reported Wednesday.

And, individuals' anxieties are growing. Consumer confidence sagged to a nearly two-year low in September, the Conference Board reported earlier this week.

All this ratchets up fears that people and businesses might cut back on spending and investing, which would hurt economic growth. A severe cutback could throw the economy into a recession.

The National Association for Business Economics says it believes growth in the third quarter - the period from July through September - slowed to a pace of around 2.4 percent. It predicts the growth rate in the final three months of this year will be around 2.5 percent. Others think growth will turn out to be weaker than those projections - in the range of a 2 percent pace or less.

If any of those projections prove correct, it would mark a considerable loss of speed for the economy.

Economic growth clocked in at a relatively brisk 3.8 percent pace in the April-to-June quarter, its strongest showing in just over a year. The improvement, however, occurred before the credit crunch took a turn for the worst later in the summer.

Former Federal Reserve chief Alan Greenspan, in an interview with The Associated Press last week, said the odds of a recession are now higher than one-in-three but are still under 50 percent.

To help cushion the blows to the economy, the Federal Reserve last week slashed a key interest rate by a bold half percentage point. Economists predict another rate cut will come in October and possibly again in December.

The Fed's aim is to induce people and companies to spend and invest more. Even if it does, it will take months for that to show up in revitalized economic activity. But the more immediate psychological boost from lower interest rates could deter individuals and businesses from changing their behavior in a drastic way that could further hurt the economy.

Housing's problems are expected to drag on well into next year, meaning the sector will continue to be the biggest thorn in the economy's side.

Whether the employment climate gets better or worse will be an important factor in how the economy fares in the months ahead.

On that front, a small glimmer of light appeared Thursday poking through all the gloom. The Labor Department reported the fewer people signed up for unemployment benefits last week. New claims fell last week 298,000, a four-month low.

Economists are predicting that new job creation staged a rebound in September; the government releases its monthly employment report next week. The unemployment rate, meanwhile, is forecast to creep up to 4.7 percent in September from 4.6 percent in August.

The economy lost 4,000 jobs in August, the first time that had happened in four years. Up until that report, a sturdy employment climate and wage growth helped to offset the negative impact of the housing bust. If the weakness seen in August were to persist, it would flash a major danger signal for the economy. Wage growth also would eventually slow, likely chilling consumer spending.

For now, even with the hope that the job market won't crumble, analysts believe it will soften. The unemployment rate by year's end is expected to climb to around 5 percent.

Fed chief Ben Bernanke and his predecessor Greenspan have repeatedly spoken of the economy's resilience. The last recession in the United States - in 2001- was mild despite blows from the bursting of the stock market bubble, the terror attacks and a wave of accounting scandals that rocked Wall Street.

That resilience is getting tested again.