Dangerous levels of lead in more toys and children's necklaces made in China are being recalled, including five more items from the popular Thomas & Friends Wooden Railway product line. 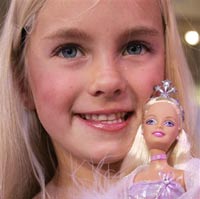 RC2 Corp.'s "Knights of the Sword" series toys and some of its Thomas and Friends items, along with floor puppet theaters and gardening tools and chairs for children, were among the more than 601,000 toys and children's jewelry announced in the recall by the Consumer Product Safety Commission.

The recalled toys contain high levels of lead in their surface paint, and the necklaces and jewelry sets contain excessive lead in some of their metal parts.

Under current regulations, children's products found to have more than .06 percent lead accessible to users are subject to a recall. The government warned parents to make sure children are not playing or using any of the recalled products.

This is the second recall from the Thomas & Friends product line after RC2 Corp. announced June 13 a recall of 1.5 million wooden railway toys. The company is recalling five items, totaling about 200,000 toys in all, of Thomas & Friends toys not included in the first recall.

"I don't think consumers have seen the end to lead paint recalls," said Julie Vallese, a spokeswoman for the Consumer Product Safety Commission.

"There's been a very concentrated, concerted effort by both the CPSC and the industry to do a top-to-bottom investigation of the products to make sure they are not in violation with any toy safety standards," said Vallese. "Today's recall is a result of that work."

In Bejing, Commerce Ministry spokesman Wang Xinpei said Thursday: "Our attitude toward the toy problem has always been the same, that the problem is one in a thousand. We'll still be highly responsible and seriously solve the problem."