The dollar fell to a new record low against the euro and a 15-year low against five other major currencies. 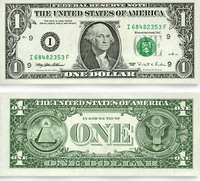 The Federal Reserve's half-point interest rate cut last week to 4.75 percent came in response to market turbulence in the U.S. and elsewhere amid the subprime mortgage crisis. Investors this week will be looking for signs that U.S. inflation is under control. The market is also hoping that readings this week on demand for U.S. durable goods, the housing market and consumer spending power will show that the U.S. economy isn't heading for recession.

"The Fed is not going to respond once with interest rates and call it a day," said David Gilmore, a partner at Foreign Exchange Analytics in Essex, Connecticut. "It's very likely that there'll be a series of rate cuts."

The dollar's decline diminishes the spending power of American tourists in Europe, while it does the opposite for many visitors to the U.S. It also makes U.S. exports more competitive, which is good news for American manufacturers.

Comments expected Wednesday by the president of the European Central Bank, Jean-Claude Trichet, "will be closely watched and assuming the theme here remains bullish, scope for further euro gains cannot be overlooked, and the next big target of $1.4200 is already well within sight," said James Hughes, a market analyst at CMC Markets.

In other trading in New York, the dollar slid to 114.88 yen from 115.39 yen even as Japan was poised to install a new prime minister on Tuesday after moderate Yasuo Fukuda was picked Sunday to succeed Shinzo Abe, who resigned earlier this month.