A European Union court squashed Microsoft Corp.'s legal challenge to a landmark antitrust ruling and record fine, a resounding victory for the EU that confirms its role as a major global regulator. 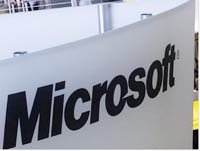 The European Court of First Instance dismissed the software giant's appeal of the EU order that ordered it to share communications code with rivals and sell a copy of Windows without Media Player.

It also upheld a EUR 497 million (US$613 million) fine - the largest ever levied by EU regulators.

The court ruled against Microsoft on both parts of the case, saying the European Commission was correct in concluding that Microsoft was guilty of monopoly abuse in trying to use its power over desktop computers to muscle into server software.

Redmond, Washington-based Microsoft said it would withhold any comment on the decision or whether it would appeal the EU's highest court, the European Court of Justice - it has two months to do so - until it had gone through the 248-page ruling.

"I don't want to talk about what will come next," said Microsoft lawyer Brad Smith about the possibility of an appeal. "We need to read the ruling before we make any decision."

Speaking outside the room where the ruling was issued, Smith sounded conciliatory, however, saying, "we look forward to complying with today's decision."

He reiterated that Microsoft "will remain committed to Europe," saying it has more than tripled its number of employees here since the late 1990s and increased its research and development efforts from US$3 million to almost US$500 million (EUR 360.8 million)

The Commission immediately said it welcomed the ruling, without giving details.