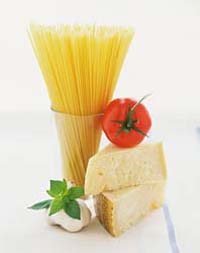 The price of basic commodities are being driven up by middlemen, while farmers and producers earnings remain flat, activists said at protests in Rome, Milan and Palermo.

In the case of pasta, Italians will soon be paying up to 20 percent more for their daily serving, be it fettuccine, linguine or spaghetti. Thursday's one-day strike was not against eating it, but against buying it.

The increase in the price of pasta is being driven by rising wheat prices worldwide, economists and producers say. The demand for wheat is the result of several trends, chiefly an increasing demand for biofuels, which can be made from wheat, and improved diets in emerging countries where putting more meat on the table is raising the demand for feed for livestock, said Francesco Bertolini, an economist at Milan's Bocconi University.

As a result, wheat stocks worldwide are being depleted to their lowest levels in decades and grain prices are soaring.

Italy produces only about half of the high-protein durum wheat used to make high-quality pasta and bread; the rest is imported from overseas markets including the United States, Canada and Ukraine.

Still, even with the projected increases, "There is no dish that costs less," said Furio Bragagnolo, the vice president of the Italian pasta manufacturers association. "Whoever decides to strike against pasta will spend more on whatever they buy instead. A plate of pasta probably costs less than an apple."

Those who are mostly likely to be concerned, producers say, are those on a fixed income, such as 70-year-old Francesca Sanfelice. "The price increase will affect how I shop. Already, I'm buying less bread, which is helping me lose weight," Sanfelice laughed.