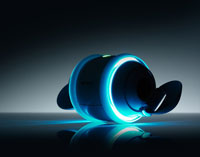 The smooth white gadget, small enough to sit on a palm, has sensors that recognize which way is up, allowing volume to be controlled by turning the player clockwise or counterclockwise, and tunes to be switched by pushing or pulling it on the floor.

The Rolly may be a fun way to impress guests at home. Sony used a dim Tokyo hotel for a demonstration Monday to reporters to show how it turned and stopped like a dancing egg, flapping the lidlike parts on its ends as though it were blinking.

The Rolly also spun quickly in place until it became a blurry circle.

Packaged moves to tunes will be available as downloads from a Sony Web site. But people will also be able to use a special program on a personal computer that analyzes music to come up with simple choreography that appears to match the rhythm of the songs, Sony said.

The motion programs are sent to the Rolly from the personal computer by Bluetooth. More ambitious people will be able to program original dances for their Rolly.

Sony has been building anticipation for the Rolly on its "countdown" Web site that showed youngsters dancing to loud music. The Tokyo-based manufacturer is promising a new visual way to enjoy music that takes advantage of its robotics technology.

Sony, which has been struggling to turn around its faltering electronics business, ended its Aibo robot dog business last year as part of its restructuring effort, disappointing avid owners.

The Rolly isn't quite a pet. But it can be set as an alarm clock.

It also already has some robotic competition in Japan - ironically from a rolling machine that moves to music from the hit iPod players of rival Apple Inc.

Japanese robot maker ZMP Inc.'s Miuro, which looks like a white ball caught between an egg, wheels about in time with music from any iPod able to lock onto the machine.

The Rolly, which plays MP3 files, Sony's own audio format called ATRAC as well as songs from CDs, can store more than 600 songs, although numbers vary by audio quality and song length. The capacity goes down to as few as 100 tunes when very complex moves are added.