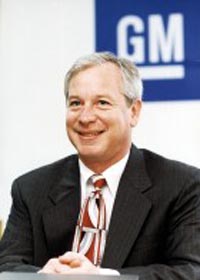 Murtaugh, who joined SAIC in June 2006, said he had "accepted an offer from Chrysler Corp. that I think will be a tremendous opportunity for me. At this stage of my career, it is an offer I just cannot turn down."

"This has been a very difficult decision for me," Murtaugh said in a statement released by SAIC.

SAIC applauded Murtaugh's contribution to the Shanghai-based automaker's efforts to build up its own-brand business after nearly a decade of working with GM.

Murtaugh "contributed his rich experience in the auto industry and demonstrated solid capabilities as a professional manager," SAIC said in a separate statement.

Murtaugh did not say what post he would take up at Chrysler, which recently announced a deal with China's biggest independent car company, Chery Automobile Co., to jointly produce and export cars to Western Europe and the United States within 2 1/2 years.

It isn't the first time Murtaugh has made an unexpected move.

He had spent 32 years with GM, where he played a key role in the launch of Shanghai GM, the company's biggest mainland venture.

Staff at GM's Shanghai office said they had no comment on Murtaugh's departure for Chrysler.