The Belarusian president said his country would pay a US$460 million (EUR 337 million) gas bill to Russia in the next few days, possibly with the help of Venezuelan President Hugo Chavez, as a Friday morning cutoff threatened by Russia's natural gas monopoly approached. 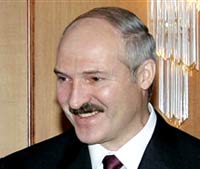 Gazprom said Wednesday that it would nearly halve the volume of gas Belarus receives if it did not pay the debt. That sparked fears Belarus could siphon gas from pipelines taking 20 percent of Russia's gas exports to Europe, and rekindled bitter memories of Gazprom's past disputes with Ukraine and Belarus.

Alexander Lukashenko's comments in Minsk suggested another protracted dispute was not likely.

"I gave the order for the money to be taken from our reserves and for the payment of $460 million to be made," an angry Lukashenko told a gathering of Belarusian officials. "Let them live in peace."

Gazprom spokesman Sergei Kuprianov said Lukashenko's comments "naturally give us hope." A delegation from Belarus pipeline operator Beltransgas will continue negotiations Friday morning in Moscow before a 10 a.m. deadline (0600 GMT), he said. "This is sufficient time to resolve the question," he said in televised comments.

Lukashenko said Russia had offered it a loan with an 8.5 percent interest rate to pay the debt - terms he described as unfavorable.

"The government of Belarus has been negotiating with Russia about this credit ... it's getting humiliating," he said in the speech before Belarusian officials. "I told them not to go there any more. We can get a loan like that from any country."

As part of the deal, Belarus agreed to sell half of its national pipeline company, Beltransgaz, to Gazprom for US$2.5 billion (EUR 1.8 billion). Gazprom has so far paid US$625 million (EUR 457 million) of that, but the money has been transferred to the Belarusian Finance Ministry, rather than being used to cover the bill.

Some observers have suggested that Gazprom is hoping to acquire further assets against Minsk's gas bills. "They want to privatize the whole country," Lukashenko said.

Disputes over energy supplies have pushed relations between the traditional allies to a new low, and Alexander Lukashenko said he would be turning to "good friends," including Venezuela's Chavez, for help paying the debt.