Groupe Danone SA, which has faced difficulties with its joint venture partners in China and India, said Wednesday that Chinese authorities seized five containers of Evian water bottles in February because of concern over high bacteria levels. 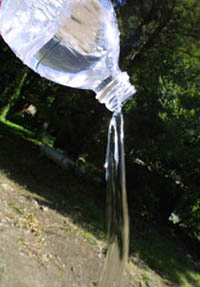 The containers hold 118,000 liters of bottled water, according to the French dairy and water company. Danone sells about 1.3 billion liters of Evian around the world each year.

The chairman of Danone's Chinese partner Wahaha Group, Zong Qinghou, recently accused the company of attempting a hostile takeover and rejected a plan by Danone to buy out some of Wahaha's assets that it doesn't own. Danone and Wahaha began establishing joint ventures in China in 1996 and their beverage operation has become one of China's largest.

Analysts at Natexis Bleichroeder said the bottle seizures "are not unrelated to the conflict between Danone and its Chinese partner" and noted that several foreign companies, including Swiss-based Nestle SA and U.S.-based Procter & Gamble Co., have faced similar accusations in China of problems with product quality.