A neighbor in a suburban Austin neighborhood appeared to be the perfect babysitter for Eryn Baugh's infant son and his 2-year-old sister. 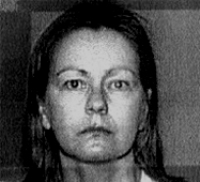 But just weeks after Henderson started working for the Baughs, 3-month-old Brandon was dead and Henderson had fled the state. The infant's body was found buried 60 miles (96 kilometers) away with his skull crushed, wrapped in his yellow-trimmed white blanket and stuffed into a box that previously held Bartles & Jaymes wine coolers.

Henderson, 50, is set to die in less than three weeks for the 1994 slaying that made her one of the most hated women in Texas. She would be just the 12th woman among the nearly 1,100 convicted killers executed since capital punishment resumed in the United States in 1977.

Henderson is scheduled to be executed on June 13. It was postponed from last month after her lawyers won a delay.

Recalling that morning 13 years ago, Henderson said Brandon was cranky, so she was swinging him around to try to calm him.

"I fell. I stepped on a toy. He flew out of my hands. He hit the bottom of the garage, which had been converted to a playroom," she said.

After hitting the concrete floor, he stopped breathing, she said. Henderson said she tried CPR for an hour.

"I knew that was a dead end," she replied. "I had tried for too long myself. What good would it have been?"

She fled, driving Brandon's sister and her own preschool daughter to the home of a relative, paying an 11-year-old there $10 to watch them.

"Even though I reacted abnormally, that doesn't make me a bad person," she said, crying. "I just didn't want to face what happened. I felt responsible. I took a life. That is very hard to deal with, especially a child."

"If a child sustains an accidental fall, we're going to freak out and get help," prosecutor Dayna Blazey said. "We're going to run to a neighbor, call 911. That's human nature not to put the baby in a wine cooler box, throw it in the trunk of a car and bury it in a shallow grave. Then she flees to Missouri and changes appearance."

A medical examiner testified Brandon's injuries were inconsistent with an accidental fall of about 4 feet but were the equivalent of a fall from a two-story building.

"We're not talking about linear skull fractures," Blazey said. "The entire back of his head was shattered."

But in a new appeal filed late last week, Henderson's lawyers included an affidavit from the medical examiner who had previously testified against her.

Dr. Roberto Bayardo, who retired last year as Travis County's chief medical examiner, said based on new scientific evidence presented to him by the experts hired by Henderson's legal team, he "cannot determine with a reasonable degree of medical certainty whether Brandon Baugh's injuries resulted from an intentional act or an accidental fall."

"Just tell me what happened that day. Tell me exactly what she did and why she did it. Then she can ask me for forgiveness. I'll probably give it _ once she drops the lies and tells the truth. There's been too many years of lying. We just want her to come clean," he said.

Henderson insisted she did her job well.

"I took good care of Brandon," Henderson insisted. "In my mind, I thought I was doing the Baughs a favor by not having to tell them their son was dead."