One worker died and another was seriously injured in an accident at a Polish-controlled oil refinery. Both workers were Polish. 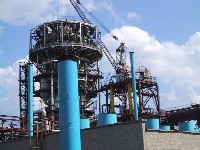 "A metal pipe fell on two workers, ages 55 and 51. One of them died, and the other was hospitalized. We are investigating the causes of the incident," Mindaugas Voldemaras, spokesman of the Mazeikiu Nafta refinery, said.

CEO Paul Nelson English and his deputy, Barton Lee Luck, have been barred from leaving Lithuania for the duration of the investigation. They have reportedly denied the charges leveled against them.