Portuguese police released a suspect they questioned about a missing British toddler, saying there was not enough evidence to file charges against him. 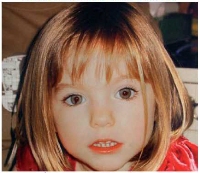 Detectives searched five houses Monday as part of their investigation of the 33-year-old man, identified in media reports as British, and seized some of his belongings, inspector Olegario de Sousa told a news conference.

Detectives also questioned two other people as part of the same inquiry into 4-year-old Madeleine McCann's disappearance in southern Portugal, he said.

The girl vanished May 3 after her parents left her, and her brother and sister, both aged 2, alone while they went to a nearby restaurant within their hotel complex in Portugal's Algarve region, a popular European tourist destination.

The suspect lives close to the hotel where the girl disappeared, De Sousa said. He declined to give the man's name or nationality, citing Portuguese secrecy laws.

The man's seized belongings are being examined for possible evidence, he said at the televised news conference.

"We hope they throw more light on the case," De Sousa said.

Police placed the man under formal investigation. In Portuguese law, opening a formal investigation is a first step toward possibly bringing formal charges. The legal measure is designed to safeguard a citizen's constitutional rights. It grants the person in question access to potential evidence and allows the person to mount a legal defense.

The villa is about 100 meters (yards) from the hotel where Madeleine and her family, from central England, were staying.

Portuguese media said the suspect had mingled with journalists outside the hotel in the days following the girl's disappearance and offered to act as an interpreter. He reportedly speaks English and Portuguese fluently.

A British journalist told Sky News she had told local police the man was behaving suspiciously and had encouraged them to follow leads suggesting the girl had been kidnapped and taken to Spain.

Last week, police called off their ground search for Madeleine, saying they had checked a 200-square kilometer (77 square-mile) area twice and found nothing.

Her parents are still at the hotel.