Bidders concede USD 9 billion pitch for Qantas is over

A 10.8 billion Australian dollar (US$8.9 billion; EURO 6.55 billion) takeover bid for one of the world's most recognizable airlines, Qantas, finally collapsed on Tuesday, pulling the company's share price down sharply. 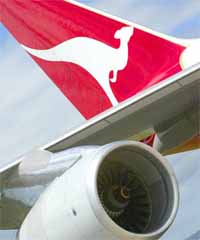 Bidders concede USD 9 billion pitch for Qantas is over

Shareholders - believed to include international hedge funds that stockpiled Qantas shares recently in hopes of making quick profits on the takeover - dumped the company's stock when trading resumed for the first time since a chaotic long weekend surrounding the buyout attempt.

Qantas shares plummeted more than 4 percent in the first hour after a trading halt was lifted before recovering a bit to close 2.97 percent lower at A$5.22, with a massive volume of almost 165 million trades.

Analysts said they expected the shares to be extremely volatile for some time, but noted that Qantas' underlying economic position was strong and the price may settle above the failed offer price from Airline Partners Australia of A$5.45-a-share.

MM&E Capital analyst Tom Elliott said the prospect of another takeover bid - APA said it was considering it - probably saved the share price from falling further.

APA, a private equity-backed group led by Macquarie Bank and U.S. buyout specialist TPG, said Tuesday it would not pursue a legal loophole that may have allowed it to reach a minimum shareholding threshold before a deadline last Friday - conceding defeat after earlier flagging a legal battle that may have lasted months.

APA said it won 46 percent of shares by Friday's deadline. It needed 50 percent to win a two-week extension to try and garner the 70 percent it needed to seal the deal.

APA said although it could claim it reached the threshold under a clause in its offer documents that required shareholders who agreed to some shares to sell all of them, it would not do so because it did not want the turmoil to continue.

"APA has decided not to pursue arguments that it did achieve voting power in excess of 50 percent by the offer deadline," the group said in a statement. "APA believes that Qantas shareholders need more certainty and accordingly, it has determined that its bid should be treated as having lapsed on 4 May 2007."

Regulator the Australian Securities and Investment Commission said in a statement it had responded to APA's comments by completing paperwork that "put beyond doubt" the end of the bid "in the interest of market certainty."

APA said it may yet launch another bid for Qantas.

Qantas Chairwoman Margaret Jackson, who faces growing pressure to quit for strongly supporting the offer, confirmed it was dead and said any new bid would have to start from scratch.

The board met Tuesday, with Jackson saying the "foremost priority of the board and management now was the continuing successful operation of the company."

"This has been an extremely difficult process since the board decided to recommend APA's bid to shareholders," she said in a statement.

Ian Curry of the Australian Shareholders Association, which represents small investors, said Jackson should quit "on the grounds that she neglected the interests of shareholders; she promoted and pushed and coerced shareholders to sell."

"The Qantas board has aligned itself with the offerer and must he accountable for some of the muck-up that has occurred," Curry told the Australian Broadcasting Corp.

The government on Monday warned Qantas it must comply with laws that ban foreign ownership of more than 49 percent of Qantas amid concern that foreign hedge funds may have become a majority bloc in the final days of the bid.

Qantas, an Australian icon known worldwide as the Flying Kangaroo for the bright red logo painted on its plane's tails, must be Australian-owned by law.

Qantas said it was urgently reviewing the level of foreign holdings.

APA's announcement followed a tumultuous weekend for the bid.

Shortly after the deadline, the group said it appeared not to have reached the threshold. Hours later, it said a single shareholder had agreed to sell enough shares to get the bid across the line, and asked corporate regulators to grant the extension.

The Takeovers Panel, which rules on buyout disputes, and ASIC, rejected the appeal.

The ructions since Friday night's deadline invited scorn from many observers, who described it as farcical, a shambles, and "Pythonesque" - a reference to the comedy team Monty Python's sketch about a pet shop owner refusing to believe a parrot returned to his store was dead.