Swiss finance minister:"World Bank President Paul Wolfowitz should reconsider his battle to stay atop the organization"

Switzerland's finance minister said Thursday that World Bank President Paul Wolfowitz should reconsider his battle to stay atop the organization, but stopped short of calling for his resignation. 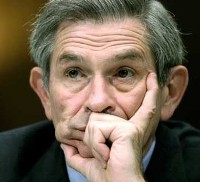 Swiss finance minister:"World Bank President Paul Wolfowitz should reconsider his battle to stay atop the organization"

Economics Minister Doris Leuthard said Wolfowitz, who is facing allegations that he showed favoritism in arranging a promotion and pay package for his girlfriend, could hurt "the special credibility" of the bank.

"We told Mr. Wolfowitz he should reflect whether he really is still the right person to have as president of this organization, (for) the credibility of the institution," said Leuthard, who recently discussed the matter with representatives of other European countries while in Washington.

Switzerland has a seat on the bank's 24-member executive board, which ultimately will decide what action, if any, to take against Wolfowitz.

A special panel of the bank is investigating whether the former second-ranking official in the U.S. Defense Department violated any bank rules in his handling of the promotion of bank employee Shaha Riza to a high-paying job at the State Department in 2005.

The controversy has prompted calls for Wolfowitz to step down from many of the bank's staff, former World Bank executives and aid groups. They fear the matter has tarnished the reputation of the institution, which is responsible for fighting global poverty, and could hobble efforts to raise billions of dollars for a World Bank program to help poor countries.

They also fear the allegations are hampering Wolfowitz's own anti-corruption program for the institution.

"The staff of the World Bank is also attacking its president, so the functioning of the organization is really in a difficult phase," Leuthard said.

The United States the bank's largest shareholder has expressed confidence in Wolfowitz, while the European Parliament on Wednesday demanded that he step down. Some African and Asian representatives, meanwhile, have indicated support for him.