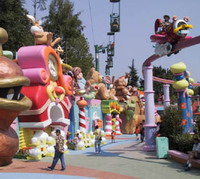 Based in Luxembourg, Merlin is part of the U.S.-based private equity Blackstone Group that controls a range of theme parks across Europe and the United States, such as the London Dungeon, Sea Life and Legoland.

The European Commission said it saw no major antitrust problems because the two companies only compete directly in southeast England, where they both own theme parks and zoos, and in London where they operate tourist attractions. The combined company will continue to face strong rivals with significant market shares, it said.

Merlin Entertainments Group, which already operates 28 attractions in eight European countries under the Sea Life, Dungeons and Earth Explorer brands, is currently the second largest visitor attraction business in Europe with some 12 million visitors per year.