Indian automaker Mahindra & Mahindra Ltd. shows a line of sport utility vehicles and trucks that it plans to start selling in the United States in 2009. 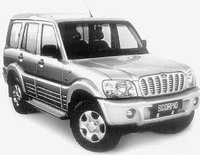 The roughly 50,000 vehicles Mahindra is expected to manufacture in India and sell in the United States the first year will enter a crowded market.

But Mahindra and its U.S. importer, Global Vehicles USA Inc. of Alpharetta, Georgia, say the Mahindra vehicles will be set apart by their sleek design, affordability and fuel efficiency.

"The consumers are really looking for something like this, particularly with the prices at the pump," William Goetze, president of Global Vehicles, told reporters at a gathering at an Atlanta airport hotel to display the Mahindra line.

Model names for the trucks are still being determined, but the SUV that will be sold in the U.S. is Mahindra's popular Scorpio model.

More than 200 dealers have been appointed to distribute Mahindra vehicles across the U.S.

Mahindra & Mahindra Ltd., which also makes jeeps and tractors, is known for aggressively pricing its vehicles.

It has tractor manufacturing plants in Calhoun, Georgia, and Red Bluff, California. Its U.S. trucks and SUVs will be made in Mumbai and imported to the United States.