In the multimedia sent by Cho Seung-Hui in between his killing spree at Virginia Tech, some have seen hints of a connection between the killer and a violent South Korean movie. 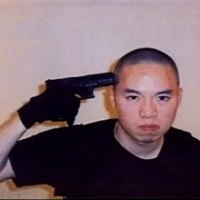 Cho sent 28 video clips, a 23-page printout of rambling, profane messages and 43 self-portrait photos to NBC News. Since the release of the material late Wednesday, a particular photo has prompted speculation, especially among online forums, that Cho may have been inspired by the 2003 movie "Oldboy."

In the photo, the killer brandishes a hammer the signature weapon of the protagonist in "Oldboy" in a pose similar to one from the film.

The 2003 film, directed by Chan-wook Park, won the Gran Prix prize at the Cannes Film Festival in 2004. The second of Park's "Vengeance Trilogy," the movie is about a man unjustly imprisoned for 15 years. After escaping, he goes on a rampage against his captor. In one scene, he dispatches over a dozen henchmen with the aid of a hammer.

The connection was spotted by Professor Paul Harris of Virginia Tech, who then alerted the authorities, according to London's Evening Standard.

It has become commonplace for movies or music to be linked to especially violent killers. One blogger for the Huffington Post, filmmaker Bob Cesca, dismissed the connection as "the most ridiculous hypothesis yet" about the Virginia Tech massacre.

There was no apparent clear link between Cho and "Oldboy" besides the photograph. Cho killed with a handgun and pistol, not a hammer. He did not seem to reference the film in any of his notes or messages. In all, 33 people, including the gunman, died in the Monday morning attacks.