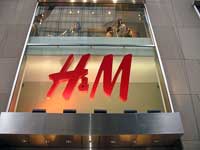 Like for like sales - or sales at stores open for at least a year - rose 17 percent, the company said in a statement. H&M did not provide specific financial figures.

The number of stores came to 1,386 as of March 31, compared with 1,216 on the same date in 2006. The company said last month its first-quarter net profit rose 27 percent as expansion helped boost sales.