The U.N. nuclear chief supports move toward nuclear power in the Middle East

The U.N. nuclear chief Sunday wrapped up a tour of the Middle East, where he expressed support for a regional move toward nuclear power. 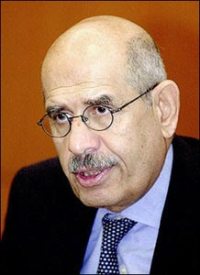 The U.N. nuclear chief supports move toward nuclear power in the Middle East

Mohamed ElBaradei, who heads the Vienna-based International Atomic Energy Agency, has responded positively to this newfound interest, but has also tried to temper fears over the nature of Iran's nuclear program.

ElBaradei's talks in Jordan occurred on the same day Iran announced it had put out bids to build two nuclear power plants to generate electricity, despite international pressure to roll back its disputed nuclear program.

Key Arab countries such as Jordan, Saudi Arabia and Egypt have expressed concern over Iran's nuclear ambitions, although Tehran insists its program is peaceful.

At an Arab summit meeting in Saudi Arabia last month, leaders warned that Iran's push for nuclear technology could be the start of "a grave and destructive nuclear arms race in the region."

ElBaradei addressed these concerns by saying fears about Iran's future intentions are "not for today, but in the coming five to 10 years," an apparent reminder to Mideast nations they don't need to rush into nuclear programs for fear Iran will build a nuclear weapon soon.

"We still have plenty of time to solve the problem peacefully," he said.

Jordan's king first announced plans for a peaceful nuclear program in January in an interview with the Israeli newspaper Haaretz.

It was assumed the king chose an Israeli newspaper to make clear the program was not directed at the Jewish state.

Israel is widely believed to have nuclear weapons of its own, but has never officially confirmed that it does.

Though the U.S. and its allies accuse Iran of seeking to develop nuclear weapons  charges Tehran denies Washington indicated it had no objection to a peaceful nuclear program in Jordan.

Several regional states, including the six-nation Gulf Cooperation Council, which includes Saudi Arabia and Oman, as well as Egypt and Turkey have declared similar intentions in recent months.

These programs are in very preliminary stages, with countries still analyzing whether nuclear development is feasible.

In Jordan, ElBaradei told the king that the IAEA was "ready to help Jordan to benefit from nuclear energy for peaceful purposes." He said his agency would dispatch a team to Jordan next week to look into its plans.

Abdullah promised that Jordan "will set a model for others in the peaceful use of nuclear energy." He said his nuclear program would only be for "peaceful uses, generating electricity and desalinating water" and that Jordan needed to develop the technology to diversify its energy sources, mainly due to rising oil prices.

Unlike its oil-rich Gulf Arab neighbors, Jordan which once entirely depended on cheap Iraqi oil supplies  now imports 95 percent of all of its energy needs. The cash-strapped kingdom says it cannot continue to pay its rising oil bill.

Abdullah said he wants to see Jordan set up a nuclear power plant by 2015 and views nuclear energy as a clear alternative to importing oil.