IRobot Corp., the maker of robots to clean carpets and hard floors, has decided the water is warm enough in the pool-cleaning market to take a swim there, too. 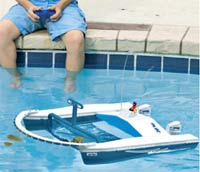 The maker of consumer and military robots said it will sell two pricey models of lawn-mower-sized pool cleaning devices. IRobot will market the $799 (EUR595) Verro 300 and the $1,199 (EUR895) Verro 600, which were developed by companies belonging to Aqua Products Group, a Cedar Grove, New Jersey-based firm that has been in the pool-cleaning market for two decades.

For now, iRobot is selling the Verros only through its Web site, rather than through retail stores, said Nancy Dussault, a spokeswoman for the Burlington, Massachusetts-based company.

For decades, pool cleaners have employed various automatic features, although more recent robotic models claim greater built-in intelligence to efficiently sift through pools and suck up debris ranging from leaves to algae particles and bacteria. Zodiac Pool Care Inc. offers cleaners that it calls robotic, rather than merely automatic, and the Verros are next-generation versions of Aqua Products' Aquabot.

In announcing the sales Tuesday, iRobot said the Verros represent a significant advance, with greater cleaning power from internal pumps that can cycle as much as 5,000 gallons (19,000 liters) of water per hour.

"By pumping that much water, it takes pressure off your pool's filtration system," Dussault said.

The company claims both Verro models can clean pools from floor to waterline in 60 to 90 minutes, rather than the four to six hours typical for most automatic models. The four-wheeled Verro 300 sprays jets of water to scrub concrete pools, while the track-wheeled 600 uses brushes to clean tile, vinyl and fiberglass.

A pool owner plugs the Verro's electrical cord into a poolside transformer and then drops the device in the drink - easier than less expensive models that require use of external pumps and a central vacuum system, Dussault said.

Until now, iRobot's consumer products have been limited to indoor cleaning, such as its Roomba vacuum. IRobot has sold more than 2 million of the dinner plate-sized Roombas in 4 1/2 years. The company also makes robots to mop hard floors and vacuum up heavy-duty messes in garages, as well as military robots used to disarm bombs.