Salma Hayek and Metro-Goldwyn-Mayer Inc. have formed a new production company, aiming to create movies that not only feature Latino themes and talent but have mass-market appeal. 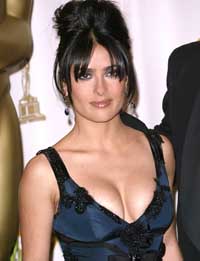 The company, Ventanazul, will be an equal partnership between the Mexico-born actress and MGM, according to a joint announcement Monday.

Under the deal, Hayek will be chief executive and her production partner Jose Tamez will serve as president. The company was expected to release between two and four films a year, with MGM handling marketing and distribution.

"This deal represents an amazing opportunity to draw upon the entire range of ways the Latin world can contribute to the film industry," Hayek said. "We want these movies to appeal to everyone, but we also hope to make Latino audiences proud."

Hayek, 40, has starred in films such as "Frida," "Desperado" and "After the Sunset." She is one of the executive producers of ABC's "Ugly Betty," which is an American adaptation of a Colombian telenovela.

She is engaged to businessman Francois-Henri Pinault. The couple is expecting their first child.