Islamic clerics demand the minister for tourism be fired

Islamic clerics at a radical mosque have demanded the minister for tourism be fired for hugging a foreign man. 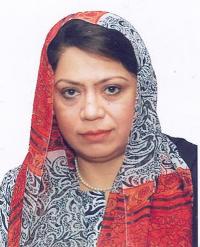 Islamic clerics demand the minister for tourism be fired

Minister for Tourism Nilofar Bakhtiar on Monday rejected the Taliban-style edict against her by clerics at Islamabad's Red Mosque, who last week set up their own court to deliver Islamic justice.

Photos carried in the Pakistani press showed Bakhtiar, helped by a male instructor during a charity parachute jump she made in France last month to raise money for victims of the massive earthquake that hit Pakistan in October 2005. Another picture shows a woman _ apparently Bakhtiar _ hugging the instructor.

On Sunday, two clerics at the mosque's Darul Afta or Department of Edicts issued a fatwa, or edict, that this was "an illegitimate and forbidden act."

"Without any doubt, she has committed a great sin," a copy of the fatwa seen by The Associated Press said. It declared that Muslim women must stay at home and must not venture out uncovered.

The fatwa demanded that Bakhtiar be sacked, given some other unspecified punishment and that her family should "force her to ask for forgiveness so that she does not repeat this un-Islamic act."

Bakhtiar on Monday rejected the edict as "baseless," but said her family and friends were now concerned for her safety.

She accused Pakistani newspapers of presenting "distorted" captions accompanying the pictures. She said she had jumped without any previous training and her French instructor had just given her a pat.

"It was just a pat because he felt so proud of me," Bakhtiar said. "I felt very happy also because it was affectionate and very encouraging."

The decree from the Red Mosque is the latest chapter in a Taliban-style anti-vice campaign launched by its hardline clerics in defiance of state authority in the relatively liberal Pakistani capital _ despite President Gen. Pervez Musharraf's sworn hope to promote moderate Islam.

Seminaries associated with the mosque have thousands of male and female students who could prove difficult for authorities to tame.

They have already warned nearby video and music shop owners to close their businesses and abducted a woman and her relatives for allegedly running a brothel, and forced her to make a public confession.

The mosque's clerics have long been alleged to have links to militancy, and on Friday, announced the establishment of an Islamic court, giving the government a one-month ultimatum to close brothels and video shops. The chief cleric threatened to launch suicide attacks if authorities tried to raid the mosque.

During a meeting Monday on law and order, officials briefed Musharraf and Prime Minister Shaukat Aziz about the Red Mosque, the state Associated Press of Pakistan news agency said.

"The two leaders directed that strict measures be taken to enforce the law," it said, without elaborating.

At the weekend, the chief of Pakistan's ruling party, Chaudhry Shujaat Hussain, held talks with the mosque's leaders after the government said it wanted to resolve the situation through negotiations _ amid concern that a confrontation at the mosque could lead to bloodshed in the heart of the capital.