After years of staying slim on a humble diet of fish, vegetables and rice, Japanese are developing a sweet tooth. That's proving a business opportunity for Krispy Kreme and other chains from the U.S., a nation famous for knowing a thing or two about fattening food. 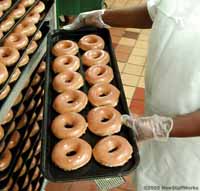 Since opening in December, Japan's first Krispy Kreme Doughnuts Inc. store is drawing long lines for an hourlong wait or longer just to get in. In the first three days, 10,000 people came to the shop.

"The texture was fluffy and sticky, unlike any other doughnut," said Yoji Yahagi, 22, who stood in line with his girlfriend to eat two chocolate doughnuts each.

The couple is typical of a growing number of Japanese who are gobbling up doughnuts, ice cream, pastries and other calorie-rich goodies. Food writer Mei Hojo says health-conscious eating remains a big trend in Japan, but it has also produced a bit of a backlash - especially for American-style food.

"People aren't satiated. That's why they are going for doughnuts and ice cream. It's a search for satiation," said Hojo, who wrote "Super Calorie Recipes."

Earlier this year, McDonald's Corp. got such rave reviews for the Mega Mac, selling at a brisk 1.7 million in four days, it's bringing back the four-patty burger in April and May.

Cold Stone Creamery, which arrived in Japan in 2005, has also been a hit. It promised "the ultimate indulgence" in ice cream, tossing in fruit, cookies and nuts. The chain is opening three stores in Japan in March and two more in April, bringing the total here to 13.

And with enthusiasm running high for American food, Burger King Corp. plans to return this summer. It withdrew from Japan in 2001 after a price war with McDonald's.

The move toward tummy-filling meals has also been a plus for Japanese companies making supersize noodles, ice cream and deluxe burgers.

The trend is so widespread Japanese coined the phrase "in-your-face-food" to describe it, underlining an apparent desire to escape the stresses of a health-conscious regimen and let go for a change.

"Perhaps behind it is the human psychology that sometimes you crave in-your-face-food to forget about counting calories," top business daily The Nikkei reported recently.

The shift is ironic coming at a time when Americans are turning to Japanese food like sushi and tofu in an effort to stay trim. Japanese are far skinnier on average than the American population, according to World Health Organization statistics.

Although concern about obesity is increasing here, it has not reached the epidemic levels of the United States. Cold Stone Creamery downsized its servings for theJapanese market.

"People are eating sweets and chocolate on this high-calorie fad. But they're also keeping their intake down in other areas," said food expert Naoki Nomura, an adviser at the government-funded Japan External Trade Organization, or JETRO, which promotes trade and investment.

Krispy Kreme faces other American-style doughnut chains, including Mister Donut, the sector leader in Japan. The lines that once formed outside Doughnut Plant, another U.S. chain that arrived in Japan in 2004, have long disappeared, and Dunkin' Donuts was forced to withdraw in 1998.

For Krispy Kreme, Japan is part of a comeback strategy. The chain, based in Winston-Salem, North Carolina, saw its stock collapse two years ago under the weight of overexpansion in the U.S., an accounting probe and the low-carb diet craze.

New management has been improving margins, and the overseas expansion is part of a revival plan announced earlier this year.

But experts warn that Japan's fascination with sweet, filling food could be a passing fad.

"Japanese are obsessed with what's novel and eye-catching," said Hikaru Hayashi, senior researcher at think-tank Hakuhodo Institute of Life and Living. Smart marketing draws instant crowds in Tokyo, but only some products survive the test of time, he said.

Some people thronging Krispy Kreme said they had heard so much talk in magazines and TV shows, they were checking out what the buzz was about - like hospital worker Tomoko Izawa, 33, who was rushing to a baby shower clutching a big bag filled with 30 doughnuts.

Krispy Kreme has created doughnuts for the Japanese market, such as cherry-filling for blossom-viewing season and heart-shaped frosting for that popular cute look, but has kept the basic recipes unchanged.

Like the stores in the U.S., visitors here watch through a glass window a machine roll off doughnuts on a shiny conveyor belt, offering what officials say is entertainment in addition to tasty treats, which have about 250 calories each for a glazed doughnut.

"Sure, it's not really health-conscious, but this isn't about that," said Krispy Kreme Doughnut Japan Co. Chief Executive Shinji Kosaka.

Nomura, with JETRO, says the eateries that do well in Japan are those that promote a fashionable image.

The same people who are snatching up Krispy Kreme doughnuts are also going to the gym to work out the calories, as well as going to foreign language lessons, aesthetic salons and romantic restaurants - all to enjoy a slice of a fairy-tale lifestyle, he said.

"People have seen that big doughnut box in Hollywood movies at executives' meetings," Nomura said. "It's a chance to experience that kind of American culture Japanese people fantasize about."