Tiger Woods and Roger Federer go about their business in different ways. 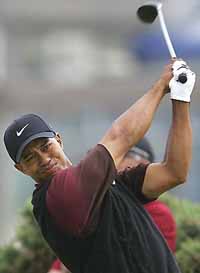 Unlike Federer, Woods rarely comes up with an ace, has no backhand and tries to be sub-par.

Federer's driver only drops him off at tournaments; Woods' driver helps him win tournaments. And Federer often hits more shots in a single round than Woods needs in a week.

Such disparities make comparing the two champions difficult. But lively debate is likely this week, when both will play in Miami.

Tiger and Roger are the best at what they do. But who's better?

Woods will stick to golf this week in the CA Championship, which begins Thursday at Doral. Fifteen miles (25 kms) to the southeast on Key Biscayne, Federer plays his opening match Saturday night in the Sony Ericsson Open. Each player seeks to win in Miami for the third year in a row.

Both events will draw big crowds. Woods hopes to be among the spectators watching Federer.

"I would love to try and catch one of his matches, if not two," Woods says.

Federer may skip Doral. He was in the gallery when Woods played tournaments in Shanghai in November and Dubai last month, and found walking with golf's most popular player a challenge.

"I went to watch Tiger, and it's not the easiest thing," Federer says. "Luckily I walked inside the ropes, but to go see him playing golf is tough. You never really see him. You only see the backs of other people. I guess tennis is more fan friendly in that respect.

"I don't know if I'm going to go see him here, but I hope he's going to come to the tennis on the weekend."

The two became friends the past year. Woods and his wife, Elin, sat in the front row at the U.S. Open as Federer's guests when he won the final last September.

They stayed in touch over the holidays, and again while Federer played in the Australian Open early this year. When he won the tournament for his 10th Grand Slam title, he received a teasing text message from Woods: "12 to 10."

They laugh about their friendly rivalry and are quick to compliment each other. When Woods was chosen Associated Press Athlete of the Year in 2006, he said his achievements were exceeded by Federer's.

"He makes it look so effortless, and it's not," says Woods, who plays a little tennis. "The shots and the angles and the things he can create, no one in the history of the game has ever been able to do. I mean, it's pretty neat for all of us to be watching a living legend play. You know he's going to surpass Sampras' record. It's just a matter of when."

Federer says he enjoys the bond with Woods because they both know what it's like to feel invincible.

"I'm a big fan of Tiger," says Federer, who recently took up golf and played last week. "What he has achieved is incredible. He has been able to win all four majors and stay at the top for so long. The impact he has had on golf is incredible. He's so charismatic and everything."

When it comes to personalities, Woods has more magnetism, Federer the better giggle. Both are cool under pressure but capable of crying once they've won.

Most comparisons focus on their accomplishments. Woods has been ranked No. 1 for 435 weeks. Federer has been No. 1 the past 164 weeks, a record streak.

When the French Open begins in two months, Federer will bid for his fourth consecutive major title, which would match Woods' so-called Tiger Slam of four in a row in 2000-01.

Federer has yet to conquer clay by winning at Roland Garros, a glaring gap in his resume. Woods has won each major event at least twice. For some, that swings the debate regarding who's best in Woods' favor.

"He has it easier," Federer says with a smile. "He's playing on grass all the time, whereas I have to go to different surfaces."

Both arrive in Miami mired in slumps by their standards, at least. Federer is coming off a defeat that ended his 41-match winning streak, a third-round loss to Guillermo Canas in Indian Wells on March 11. Woods tied for 22nd last week at Bay Hill, ending his streak of 13 consecutive top-10 finishes worldwide, reports AP.

But such challengers as Rafael Nadal and Phil Mickelson have failed to mount much of a threat to the supremacy of Federer and Woods. Both could use a rivalry to inspire new achievements, and this weekend they have it: Roger vs. Tiger. Sit back, savor the matchup and prepare to say, "Great shot."