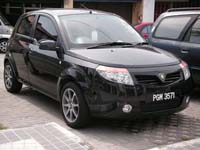 The company also said the government, which holds a 43 percent stake in Proton through its investment arm Khazanah Nasional, was expected to make a final decision on its foreign strategic partnership by March.

Proton's managing director, Syed Zainal Abidin Syed Mohamed Tahir, said a brand new model would be launched in the middle of the year and other new variants by the end of the year.

"We are putting all our energy and efforts into ushering in a more exciting generation of Proton cars," he said in a speech when launching new variants for the compact Savvy car and the 1.6 liter Waja sedan.

"As the competition grows more intense, Proton intends to take full advantage of and capitalize on the greater liberalization of the automotive industry, defending our domestic market and at the same time capturing a more sizable market share abroad," he said.

Proton has been losing money and market share in Malaysia, Southeast Asia's biggest passenger car market, amid stiff competition from both domestic and foreign rivals.

Syed Zainal said Proton had increased sales abroad in the United Kingdom and Australia, and has also begun tapping markets in South Africa and several regions in the Middle East.

The company will focus on export growth, quality improvement, introduction of new models and better efficiency to mitigate the impact of a more liberalized automotive industry and high cost of raw materials, he said, without elaborating.

Syed Zainal was quoted by national news agency Bernama as saying the government was still in talks with foreign firms, including General Motors Corp., on a possible partnership and is likely to make a decision by March.

"We are looking at a foreign partner," he was quoted as saying. "Our engagement is to advise the government on the selection of the foreign partner. I think the rest, let the shareholders decide."

GM, Germany's Volkswagen AG, France's PSA Peugeot and two local auto groups are vying for a stake in Proton, which has an underutilized auto plant. That could help foreign carmakers consolidate their position in Asia's booming automotive market, reports AP.

Proton is hoping to reverse its fortune with a foreign strategic partnership that can provide it with technology and access to the international market.

Proton's losses are expected to widen after the company reported a 250.3 million ringgit (US$71.5 million; Ђ55 million) loss in the three months ended September 2006 because of lower car sales and rising expenses.