Volkswagen AG's former personnel chief, Peter Hartz, goes on trial Wednesday in a corruption case that has shone an unsavory light on the cozy relationship between the company's management and labor representatives. 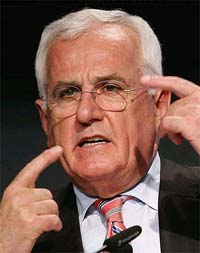 The case against Hartz and others rests on accusations that key labor officials at the company including a current member of the German parliament were showered with illegally financed perks, including trips and prostitutes.

Hartz, who once advised former Chancellor Gerhard Schroeder on how to streamline Germany's jobless benefit system, faces up to five years in prison or fines if convicted of breach of trust.

Hartz faces 44 charges of breach of trust for alleged offenses including awarding "special bonuses" worth Ђ1.9 million (US$2.5 million) in VW funds to Klaus Volkert, the former head of the company's powerful employee council, and paying Ђ400,000 (US$520,000) to Volkert's lover.

Prosecutors have, however, dropped from the case against Hartz charges related to the alleged use of company funds to pay for prostitutes which, they say, caused the company far less financial damage than the alleged bonus payments.

Hartz, who resigned from Volkswagen in 2005, has not publicly commented on the charges, nor has his lawyer. The trial is expected to feature at least two court sessions, but no date has been set for a verdict.

The case suggests a seamy side to the close partnership between Volkswagen and its labor representatives, who under German law sit on the board of directors and must be consulted on major new initiatives such as where to locate new production.

The two sides traditionally have worked together to preserve jobs through methods such as shorter work weeks a key goal of one of the company's largest shareholders, the state of Lower Saxony.

Thirteen people are being investigated, but only Hartz and Hans-Juergen Uhl, a lawmaker for the center-left Social Democrats, have been indicted.

Uhl, a former member of Volkswagen's works council, was charged with two counts of being an accessory to breach of trust and five counts of making false statements while under oath.

Prosecutors in Braunschweig have said Uhl allegedly participated in events in Barcelona and Seoul in 2001 "during the course of which the services of prostitutes allegedly were called upon."

Federal lawmakers voted to lift his parliamentary immunity so he could be prosecuted, but he remains in parliament. He has denied wrongdoing.

Volkert was arrested Nov. 21 after prosecutors said he tried to pressure another suspect in the case to tone down evidence given against him.

He was released in December, and no formal charges have been brought, but court spokesman Ingo Gross said the Braunschweig court considers him a suspect on 33 counts of inciting breach of trust, reports AP.

The company also faces separate investigations on executives' alleged taking of bribes from would-be suppliers to the company in an effort to court business, as well as the formation of front companies to secure foreign contracts.

Volkswagen has weathered the scandal in terms of earnings. In October, it posted a 77 percent increase in net profits to Ђ1.21 billion and stronger sales for the first nine months of the year, despite high restructuring costs.