Before making a beer run, lager-lovers may soon need to start searching suds-soaked sofas for a few more dollars and cents thanks, in part, to the rising cost of barley. 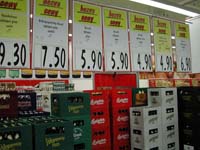 Production numbers are down and costs are up for the grain, one of several used to make beer. Combined with soaring energy costs and the high cost of other raw materials, like aluminum, analysts caution those extra dollars and cents may soon be passed along to consumers.

In fact, several breweries are already raising their prices due partially to raw material costs. Anheuser-Busch Cos. of St. Louis is planning a price increase for early this year, and earlier this month, Mexican brewing and bottling firm Femsa said it will raise beer prices to recover the higher costs of aluminum, glass bottles and barley and to keep up with inflation.

Those price increases are not always felt in consumers' pocketbooks. Distributors and retailers frequently eat the costs themselves. But with prices shooting up quickly, that could soon change.

"Raw material costs have gone up so much in such a short period of time, it's unavoidable that you will see some price increases eventually," said Morningstar analyst Matthew Reilly.

Barley prices have steadily inched up each month, ending 2006 averaging $3.19 per bushel in December an increase of about 24 percent from December's average price of $2.57 in 2005. Meanwhile, production has fallen 15 percent to 180 million bushels, down from 211.9 million in 2005, mainly due to droughts in Australia and the Midwest and more farmers choosing to grow different crops like corn and soybeans.

Bernstein Research analyst Robert van Brugge forecast that this year's barley price increases will impact brewers' cost of goods sold or the cost of the raw materials used in production by 1 to 2 percent in 2007.

The analyst said he believes brewers will be forced to pass along some of that increase this year to consumers.

And, not surprisingly, consumers are not always happy to shell out more cash. A 1 percent increase in the cost of goods sold typically translates to 0.5 percent reduction in volume, meaning consumers typically buy less, van Brugge said.

Molson Coors Brewing Co. may be in more danger than competitor Anheuser-Busch since Molson will be faced with spiking aluminum costs. The Golden, Colo. company's aluminum price cap expires this year. Aluminum prices for Anheuser-Busch, meanwhile, are capped. Aluminum accounts for about 20 percent of brewers' cost of goods sold while barley makes up 8 to 12 percent typically.

The situation may improve later in the year a prospect smaller breweries are counting on to help with costs. Mark Stutrud, president and founder of Summit Brewery in St. Paul, Minnesota, said he was hoping prices fall somewhat in July and August.

"If there's an increase in the amount that cultivated, that would be good news," Stutrud said.

Summit Brewery is the third largest brewery in Minnesota and makes more than 60,000 barrels of beer a year, including an extra pale ale popular in the Twin Cities area. Its beers are available from distributors in 13 states in the Midwest and Great Plains.

Stutrud has had to increase costs modestly each year since early 2000 to keep up with price increases and inflation.

He said his customers have not reacted too harshly to paying more for their brew. But Reilly said both small and large breweries know that rising prices do not typically make for happy customers.

"They are all very aware of the price pressures they're under," he said.