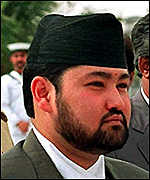 The attack Tuesday night was the latest in a recent upsurge in violence linked to the rebels. At least 10 policemen and 24 rebels were killed earlier in the day.

Police were still investigating the bomb attack at the Katmandu office of the King Mahendra Trust for Nature Conservation, but said they suspected the rebels.

The office was closed at the time, and two guards on duty were wounded, one seriously, police officials said on condition of anonymity because they were not authorized to speak to reporters.

The bomb was tossed at the rear door of the building, they said.

The conservation group, well known for its work to protect animals and nature, is headed by Crown Prince Paras, heir to the throne and King Gyanendra's only son.

Rebel violence and fighting between the guerrillas and government troops has escalated sharply in recent days.