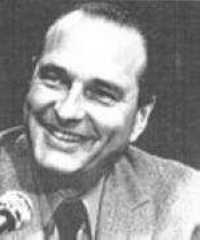 Speaking to reporters on the final day of his visit to Saudi Arabia , Chirac said he was aware of the calls for cutting off aid to a Palestinian Authority led by Hamas, owing to the militant group's refusal to recognize Israel and renounce violence.

"I am hostile to sanctions in general, and in this case in particular, because I do not see why we would impose sanctions whose consequences would in reality be borne mainly by the Palestinian people," Chirac said.

The United States and the European Union have threatened to halt their annual aid to the Palestinian Authority once a Hamas-led government is formed. Since winning the Palestinian legislative elections by a landslide in January, the group has rebuffed intense international pressure for a change of policy on Israel and violence.

Chirac said Hamas has to come round to recognizing Israel and stopping its militants from attacking the Jewish state because "one cannot recognize a government that uses violence as a policy."

"I hope that the discussions begun with Hamas by a certain number of parties can lead to this positive result," Chirac added, apparently referring to the recent Russian talks with Hamas leader.

"Speaking truthfully, I don't doubt it because Hamas must now assume the responsibilities of democracy," Chirac added.

On other Middle Eastern issues, Chirac reiterated that Syria must cooperate "totally" with a U.N. investigation into the assassination of Lebanese former prime minister Rafik Hariri in February 2005.

While Syria repeated Sunday that it would cooperate fully with the inquiry, President Bashar Assad has so far indicated he is unwilling to be questioned by the U.N. investigators.

The inquiry, which is mandated by the U.N. Security Council, has twice asked for an interview with the Syrian leader. In two interim reports, the inquiry has said that Syrian intelligence officials were involved in the killing of Hariri, who died in a massive truck bombing in central Beirut .

Syria has rejected the reports as politically motivated and tried to discredit those who gave evidence to the commission.

France "condemns all those who question cooperation with the commission of inquiry" into Hariri's killing, Chirac said.

The French leader also said he was "disappointed" by Iran 's responses to international concerns over its nuclear program. The Tehran government has rejected repeated calls for it to abandon uranium enrichment, a process that can produce material for nuclear power generators or warheads.

"We are not giving up," Chirac said.

He said Iran should have "legitimate and normal" access to civilian nuclear technology, but it should also respect international controls to prevent the spread of nuclear weapons.

Iran insists its nuclear program is intended only for generating electricity and denies it would use enrichment to make nuclear bombs.