Heavy rain triggered flooding and landslides in central Indonesia, killing at least 31 people in the past week, a government official said Wednesday. 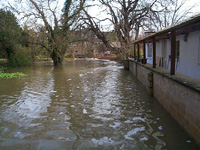 Most of the deaths occurred Tuesday in Manado, the capital of north Sulawesi province, where 19 bodies were pulled from the mud following a landslide, said Alex Wowor, chief of the regional development agency.

At least 12 other people have died in nearby areas in recent days, he said, adding that constant rain had caused several rivers to overflow.

"Most of the victims were swept away by currents or buried in mud," Wowor said, adding that others died when landslides and floods caused their homes to collapse.

Indonesia faces two main monsoon seasons each year caused by changing winds in the Indian Ocean, with the heaviest rain usually falling between October and April.

Meteorologist Teddy Ranti said low pressure systems in the Philippines, just north of Manado, had contributed to the particularly strong downpours this month.

Damage to houses, livestock and rice fields was valued at US$19 million ( Ђ 15 million), Wowor said, and it will cost at least US$8.6 million ( Ђ 7.2 million) to repair infrastructure and upgrade water drainage systems in Manado alone, reports the AP.