U.S. Secretary of State Condoleezza Rice met with democracy activists Wednesday as she continued a Mideast trip complicated by disagreements over the militant group Hamas. For the first time, Rice also planned to meet with an adviser to the sheik of Al-Azhar mosque, in an apparent attempt to bridge gaps exposed by the controversy over cartoon drawings of the Prophet. During Rice's visit to Egypt last summer, she met with opposition figures and dissidents, but did not meet with religious figures. This time, she was to meet Ali El Samman, an adviser on interfaith dialogue to the grand sheik of Al-Azhar, Mohammed Sayed Tantawi. 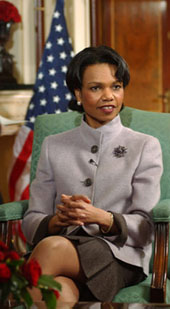 "For me, it's important to transcend the issue of the Prophet's insulting drawings ... and move to another important point, to reach a formula to start a dialogue that will benefit the world," El Samman told the newspaper Asharq AlAwsat on Wednesday, before the meeting.

Among the democracy activists Rice will meet is Saad Eddin Ibrahim, an outspoken Egyptian-American activist who in the past has been jailed for his activism. But unlike on her last visit, Rice won't meet with prominent opposition leader Ayman Nour, who finished second to President Hosni Mubarak in Egypt 's first-ever presidential elections last fall.

Nour, 41, was sentenced to five years in prison in December for forgery. The United States has criticized the verdict, and Rice had said she would discuss Nour with Egyptian officials during the two-day visit that ends Wednesday.

Saudi Arabia is her next stop. Rice is making her first trip to the region since the surprise victory of the militant group Hamas in Palestinian elections last month. Rice has said she has no regrets about the results, but at a Tuesday press conference with Egyptian Foreign Minister Ahmed Aboul Gheit, it was clear that Egypt and the United States differ on how to treat Hamas.

Aboul Gheit said it would be premature to cut off international aid for a Palestinian government even if Hamas controls it, setting back Bush administration's hopes for an immediate, unified front against the group.

Rice also faced tough questions on new pictures from the Abu Ghraib scandal. She was asked whether the United States intended to impose a "democracy of torture" and human rights abuses, as, one reporter suggested, the United States had done in Iraq .

Before Rice's visit, one Egyptian analyst, Amr Abdel Samie cited the Abu Ghraib pictures as an example of American hypocrisy, in the staunch pro-government daily Rose El-Youssef. He criticized "the stupid silliness that the American administration representatives keep raising up in their visits, commenting on the Egyptian state of democracy and human rights, as if they are the field inspectors walking and screaming at peasants."

In the same paper, columnist Wahid Abdel Meguid called the new footage evidence of " America 's newest democratic inventions in the field of violation of human rights." Rice is also meeting with Hala Moustafa, editor of Democracy Quarterly, which is one of the publications of the pro-government daily, al-Ahram. Moustafa, a member of Mubarak's ruling party, has been critical of the party lately, reports the AP.