President Vladimir Putin expressed dissatisfaction Friday with Russia's relations with Moldova, an ex-Soviet republic whose leadership has turned Westward and is seeking the withdrawal of Russian troops from a separatist region. 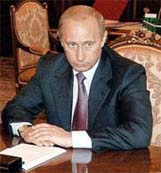 "We can hardly be satisfied with the state and general direction of recent developments in Russian-Moldovan relations," Putin said at a Kremlin ceremony during which several new foreign ambassadors including Moldova's presented their credentials.

"At the moment they do not reflect the spirit of trust and friendship that has been inherent in multifaceted Russian-Moldovan ties for decades," he said, according to a Kremlin transcript.

The Moldovan government has sought to strengthen ties with Europe and diminish Russian influence recently, and has stepped up its demanded the withdrawal of about 1,500 troops from the breakaway Trans-Dniester region.

The Moldovan government believes the Russian troops are in mostly Russian-speaking Trans-Dniester to support the separatists who broke away from central government control in 1992 after a short war that left some 1,500 people dead, reports AP.