Floating buildings to appear in the heart of Moscow

The architectural concept for the development of the territory of the Badaevsky Brewery in Moscow was unveiled as a complex of futuristic buildings floating on giant pillars. The concept was presented on the website of Swiss architect firm Herzog & de Meuron. The firm offers to keep old buildings of the brewery and completely transform the surrounding industrial zone to build a pedestrian embankment with floating buildings around the brewery. 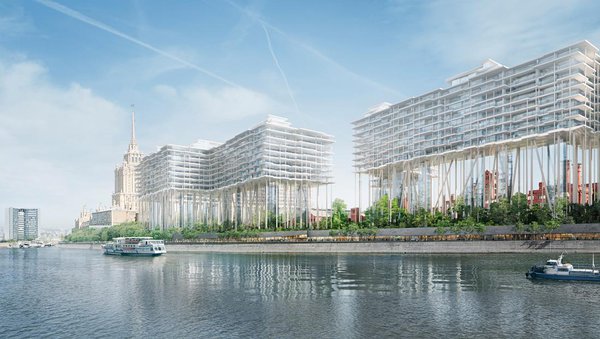 The Moscow authorities have been considering the renovation of the factory zone in the heart of Moscow for a long time. The Badaevsky Brewery is one of the oldest breweries in Russia. It was founded in 1875, and its buildings today serve as a monument of industrial architecture of the XIX century. However, the territory of the brewery was abandoned and remains unused, even though the brewery is only seven kilometers from the Kremlin taking six hectares of land between Kutuzovsky Prospekt and the Moskva River.

Swiss architect Pierre de Meuron said that his project stipulates the construction of 100,000 m2 of housing - a complex of floating houses resting on 35-meter pillars. The new buildings will thus not change the historical landscape, although they will definitely change the skyline.

In addition, the architect firm plans to set up a park on the territory of the former brewery - a new park with groves and lawns. "In fact, we are recreating a real Russian forest," de Meuron said.