This year people all over the world celebrate the 150th anniversary of the Sri Lankan tea industry which has introduced a very special gift to the world - Ceylon tea. 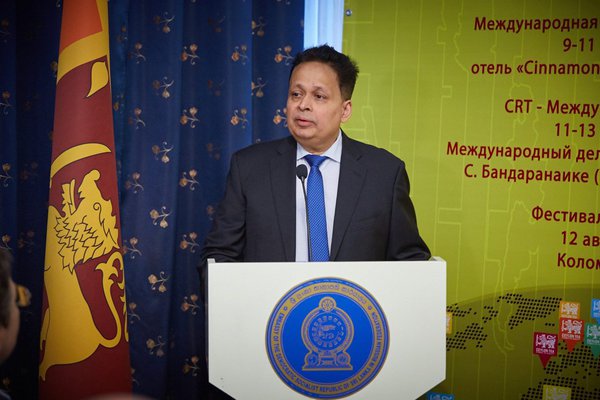 In the framework of the global celebrations, the Embassy of Sri Lanka in the Russian Federation organized the Global Tea Party on July 6, 2017. The event was jointly organized by the Embassy, Sri Lanka Tea Board and the Colombo Traders Association under the guidance of Hon. Navin Dissanayake, Minister of Plantation Industries of Sri Lanka.

The Global Tea Party in Moscow was attended by more than 60 invitees among whom were representatives of the Russian tea and business sectors, officials from the Minister of Foreign Affairs of Russia and other prominent guests.

The welcome address of the event was made by H. E. Dr. Saman Weerasinghe, Ambassador of Sri Lanka to the Russian Federation, who stated that the two countries shared a lot of common history in the tea industry and pointed out the importance of mutual cooperation between Russia and Sri Lankan tea companies, as strengthening of bilateral relations in the private sector will lead to further development of trade and economic cooperation between Sri Lanka and Russia on the whole.

The event was elegantly organized and a demonstration of Ceylon tea drinks preparation was conducted by Mr. Ustinya Kosterkina, a professional tea master and the winner of the Tea Master Cup Championship 2016, which made the Global Tea Party even more fascinating.

Besides the Embassy of Sri Lanka in Moscow, on July 6, 2017 other Sri Lankan Diplomatic Missions all over the world organized the same Global Tea Party as a part of the global celebrations of 150 years of Ceylon tea. In addition to these events, the Sri Lankan Tea Board and other Sri Lankan authorities will hold a Colombo International Tea Convention on August 8-11, 2017 and other international exhibitions to contribute to further development of the Sri Lankan tea industry and all business connections established with other countries all over the globe.

Extract from the speech given by H.E. Dr. Saman Weerasinghe, Ambassador of Sri Lanka to Russia:

For many years Russia has continued to rely on Ceylon tea and Sri Lanka has become the most important supplier to the market. So we can confidently say that Russia's association with Ceylon Tea is almost as long as the 150 year history of the industry."