On February 19, 2015, Deputy Governor of the Nizhny Novgorod region, Yevgeny Lyulin, took part in the ceremony to open the first hotel of Marriott international chain in the region. 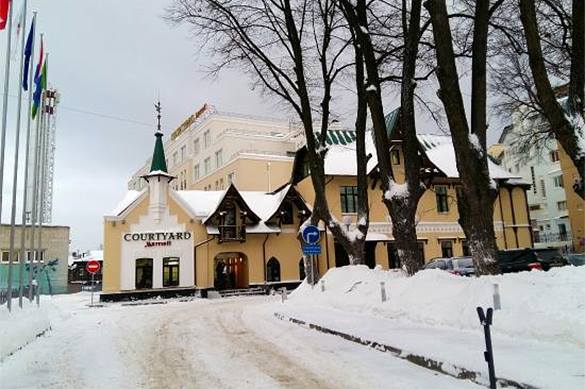 An object of cultural heritage of regional significance, the manor of merchant Dmitry Sirotkin, has become a part of the hotel located in Ilyinskaya St., 46b.

During the ceremony, Vice-President of the Russian Hotel Association, Vladimir Efimov, awarded a four-star certificate to Courtyard by Marriott Nizhny Novgorod City Center.

"I am very pleased to see that the object of cultural heritage - merchant Sirotkin's manor - a piece of "Wooden Art Nouveau" architecture of the 19th century, has been finally restored to live a new life. I think that it is important for all residents of the region that the historical appearance of this part of Nizhny Novgorod has been preserved," Yevgeny Lyulin said.

According to Nizhny Novgorod region Governor Valery Shantsev, the potential for the tourist traffic to grow in the region is much higher. "According to the Nizhny Novgorod region's development strategy, we are to reach the level of three million tourists a year by 2020. Approximately, the number of residents should equal the number of tourists. This is the ratio in foreign countries, where tourism is a profitable industry," Governor Valery Shantsev said.

The first hotel of Marriott international chain in the region is designed for business tourism. Courtyard by Marriott Nizhny Novgorod City Center offers 150 rooms, including standard, deluxe rooms and suites with a private entrance, modern conference rooms with 100 seats, a banquet hall for 50 people and an "a la carte" restaurant for 50 people.

In 2014, the project of the hotel received the status of a priority investment project in the Nizhny Novgorod region. Investment in the project totaled 997 million rubles. The hotel has created 60 new jobs. The hotel staff took hotel service courses according to Marriott international standards. The brand provides management services for 4,000 hotels under 16 brands in 72 countries (as of 2014). Courtyard by Marriott currently operates nearly 1,000 hotels in 38 countries.