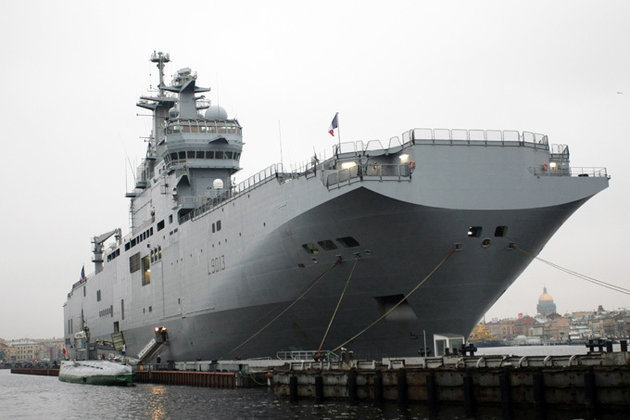 Indian authorities may cancel the contract that was signed with France in early September for the delivery of 126 Rafale fighters, should France refuse to supply Mistral vessels to Russia. The contract with India is evaluated from $20 to $22 billion.

According to French online publication Breizh, international experts warned that France risked losing the reputation of a reliable arms supplier with its decision not to ship Mistral vessels to Russia.

According to Bigness.ru, the "Vladivostok" Mistral-class helicopter carrier is to be delivered to Russia on November 27, although there is no official confirmation to this information. Noteworthy, France has recently launched the second Mistral vessel, the Sevastopol, under the contract with Russia.

Russia's Rosoboronexport and French-based company DCNS signed a contract for the construction of two Mistral-class helicopter carriers in June 2011. The after parts of the ships were built at the Baltic Shipyard (part of the United Shipbuilding Corporation) in Russia's St. Petersburg. The joining with head parts and final completion is performed at STX France shipyard in Saint-Nazaire. In September, French President Francois Hollande said that the final decision on the delivery of Mistral helicopter carriers to Russia would be taken depending on the situation in Ukraine.

France will have to pay Russia 3 billion euros in damages, should it finally refuse to deliver the vessels.