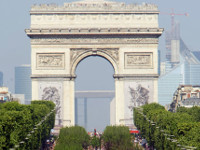 French automobile giant Renault froze the project to develop a military vehicle, in which Russia participated. It goes about the vehicle known as "Atom".

Renault's Swedish partners supported the boycott of Russia too. Volvo was going to make engines for the new machine.

Stockholm earlier said that Sweden could terminate its contract with Russia's Uralvagonzavod about the joint production of "Atom" trucks. Although Sweden is not a NATO member, the country, like NATO members, threatened to freeze cooperation with Russia in military sphere.

Officials with the French government also stated that they may cancel the contract for the supply of Mistral helicopter carriers due to Russia's stance on Ukraine. The contract was evaluated at over one billion rubles.