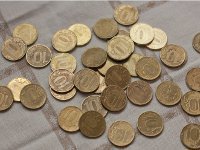 The cost of Bitcoin virtual currency has reached another record,  surpassing the mark of $300 during the auction at Mt Gox electronic platform. This afternoon, it rose to 321 dollars per Bitcoin, and then dropped to $311. The previous record was set yesterday - one Bitcoin was worth more than $272.

Over the last week, the price of the Bitcoin grew by 44.6 percent. Experts attribute the rise of the virtual currency with the growing awareness of the brand.

Peer to peer payment system Bitcoin was launched in 2009. It uses the virtual currency of the same name. In the spring of 2013, the total volume of Bitcoins reached one billion dollars.