The quotations of Apple's shares have started to decline, following not a very presentation of the company's new products. For the time being, the shares have dropped by 2.3 percent. 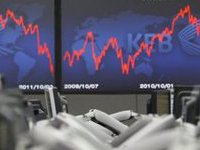 At the annual presentation, Apple introduced several of its novelties. On September 10, the company unveiled new models of the iPhone - 5S and 5C. The event did not bring any surprises. All the previously leaked information turned out to be true.

The innovations of the series of iPhone 5S smart phones, as experts noted, were very trivial. They include fingerprints scanner, 64- bit A7 processor, 8-megapixel iSight camera with True Tone flash consisting of interchangeable warm and cold light.

The new IPhone 5C, apparently, is designed to capture a part of the low-cost market of smartphones, which "belongs" to Chinese manufacturers of quite decent quality gadgets .

It turned out that the plastic iPhone 5C is only $100 cheaper than a more advanced model of the new iPhone 5S with its solid metal body and golden colour.

In Russia, iPhone 5C will become available in November or December at a price of 20,000 rubles, which is not a budget price at all ($600).