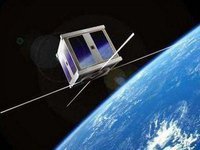 French company Thales Alenia Space will build Yamal-601 communications satellite for a subsidiary of Gazprom. The cost of the satellite will make up more than 10 billion rubles.

As expected, the Yamal-601 spacecraft, owned by JSC Gazprom Space Systems, will be launched into orbit by Proton-M rocket. In addition to Thales-Alenia Space France, Astrium SAS, McDonald Detuayler Partners, as well as Russian company ISS took part in the open competition for the creation of the satellite.