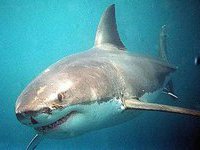 Two airlines from South Korea - Asiana and Korean Air - as well as a carrier from Fiji, have become the last airlines for the time being that have decided not to engage in transportation of shark fins, CNN reports.

Each company has released official statements on the subject. Representatives of Korean Air said that they decided to join members of the international community, who actively appeal to the protection of endangered shark species.

Each year, approximately 72 million sharks are killed, about 10,000 fins are sold. Hong Kong is the main buyer.