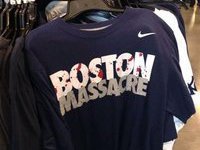 Sports apparel maker Nike revoked "Boston Massacre" T-shirts from retail networks. Initially, the inscription was related to a baseball game from 1978, according to the Associated Press.

Spokespeople for the company specializing in the production of sports clothing and shoes, The shirts were withdrawn from sales in connection with the events of last week, when three people were killed in the terrorist attack in Boston, allegedly committed by the Tsarnaev brothers.

Initially, the shirts were sold in Nike retail stores and were associated with entirely peaceful events. "Boston Massacre" was related to the baseball match between the New-York Yankees and Boston Red Sox in 1978. The T-shirts were designed for the fans of the New York club that won the game.

As for the investigation of Boston terrorist attacks, Dzhokhar Tsarnaev allegedly blamed his brother for the attacks. His brother, Tamerlane, was killed in a shootout with police. Meanwhile, ABC News quoted the aunt of 26-year-old Tamerlane Tsarnaev. According to the woman, the young man was more an American than a Chechen, and during his trip to Russia, to his homeland, he felt out of place.